Hosted by the German Institute of Science and Technology – TUM Asia (TUM Asia) and the Economic Development Board Singapore (EDB), the “World of Circuits” event was an exclusive networking session held on 16 April at TUM Asia’s Pixel campus. Attendees of the event include students from TUM Asia that are undertaking the Master of Science programme in Integrated Circuit Design, the Bachelor of Science programme in Electrical Engineering and Information Technology as well as industry representatives from fourteen prestigious firms from the semiconductor industry. The companies that participated in the event include Broadcom Singapore, Infineon Technologies Asia Pacific, Lantiq Asia Pacific, Rohde and Schwarz Asia, STMicroelectronics Asia Pacific, Volterra Asia and Xilinx Asia Pacific to name a few. 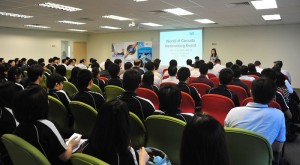 The “World of Circuits” event was organised to heighten local firms’ awareness regarding TUM Asia. It also served as a valuable opportunity for TUM Asia’s students to understand more about the career prospects within the local engineering industry.

The event started off with an opening speech by Dr. Markus Waechter, Managing Director of TUM Asia, who shared with the audience the historical background of Technische Universität München. The crowd was subsequently addressed by Mr. Terence Gan, Head of Electronics, EDB. He provided an interesting twist to the presentation session by framing it with three questions that led to statistics that indicate continual strong growth and investment in the semiconductor industry. Mr. Chris Tan, Manager, Learning & Development, Human Resource in the Organisation Development Group of Rohde and Schwarz Asia and Mr. David Ho, Director, Analog and Mixed Signal Engineering Broadcom Singapore later shared about the career prospects both in their respective companies and in general, the IC Design and engineering profession. Aside hearing from industry participants, the attendees had an opportunity to hear from TUM Asia alumni who graduated from the Master of Science in Integrated Circuit Design and are all currently now working with major firms within the industry. 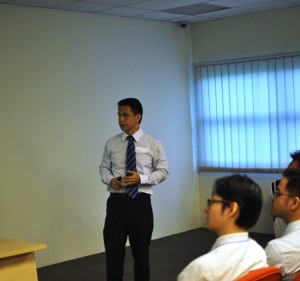 The presentation session concluded with students moving on to the exhibition room to explore the circuit boards and displays provided by participating companies. Students crowded around the various booths and spent some time engaging with the company representatives. Many of them were keen to find out the qualities that companies look out for when recruiting potential engineers. Firms expressed that they prefer candidates who possess skills that are “off the books”. This includes the presence of a positive self-learning attitude, willingness to acquire new knowledge and capabilities, self-motivated with good leadership qualities and excellent team player. Above all, the ideal candidate should also be a confident individual with a strong passion in engineering.

So the next question is if companies have been able to recruit the kind of candidates they are talking about. Unfortunately it appears that they are facing a challenge in recruiting good engineers. Mr. Martin Tilch, Director, Product and Test Engineering, Lantiq Asia Pacific expressed his concern: “The industry is currently facing a shortage of ICD engineers.” According to Mr. Tilch, many engineers are switching over to the field of business, a competitive playfield where they can make lucrative amounts of money from there.

In order to attract and retain engineering talents, some firms mentioned that they are providing scholarships to students who display great interests in engineering; an initiative that assist them in recruiting individuals with good merits early. Others highlighted that they include enrichment programs for their employees as part of their talent retention strategy. For instance, Broadcom Singapore provides technical and even non-technical (such as personal development) courses to allow employees to upgrade themselves and keep up with the needs of their roles and responsibilities in order to cope with the ever-changing engineering industry.

Other questions on top of the students’ mind include how to score in interviews. Mr. Chris Tan, Rohde and Schwarz Asia advised that: “Paper qualification shows the foundation acquired. During a call up for an interview, you are already hired. It is important then how you perform during the interview.  Eventually the effort, attitude, competency and integrity of the person are qualities we look out for.” 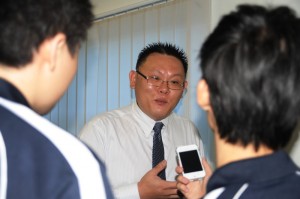 Overall, these firms agree that they still prefer to scout for talents within the Asia Pacific region. They find that an engineer here not only possess a good set of academic results but also possesses good personality, learning capabilities and passion.

As the designated student report for this event, I will like to ask all students who chose Engineering as their study major. Do you have the passion to take you through all the way? 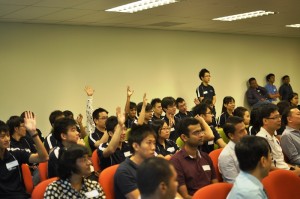