Making a difference to TUMorrow

The choice to embark on this journey at TUM Asia was a deliberate one and I havehad no regrets making this decision. I had a university education that was truly an enjoyable learning journey. 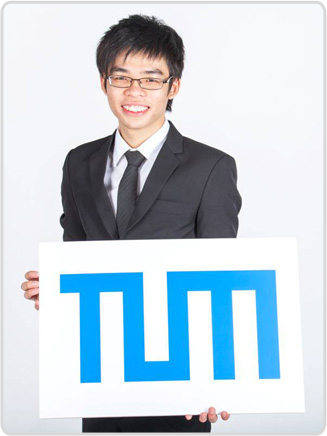 Bachelor of Science in Electrical Engineering and IT

For Richard, his choice to choose TUM Asia over his other university offers was a deliberate one. He admits, “The primary reason I chose TUM Asia over my other local university offers was due to the shorter duration time. But as I was doing my research, I realized that I was staring down at a university which had so much to offer! Whether it be prestige, honours or quality of faculty – there was something in TUM that you couldn’t quite find in many universities.”

Richard has never looked back since making that decision. He was both amazed and surprised at the classroom culture of a German university. One distinct difference he noted was the academic grading system. “There was no bell curve in our grading system and therefore, we didn’t have the race of survival of the fittest, but instead there was a culture where everyone helped each other. This gave us a university education where we could truly learn and enjoy the learning process.”

Besides his academic journey, Richard also found a newfound voice during his time at TUM Asia. Serving as the Head of Welfare in the Student Management Committee, he gained experience in planning events for the entire SIT (Singapore Institute of Technology) student body, and had opportunities to network with industry partners of TUM Asia through corporate events and fairs. This confidence he gained in himself has not only benefitted him during his time in Munich, but it also added the extra dimension into his career. As a project engineer, he is able to confidently handle the needs of his clients’ multi-million dollar projects and truly make a difference to the world we live in.