TAIPEI, TAIWAN–TUM Asia made history at the 10th QS Asia Pacific Professional Leaders Education (APPLE) Conference and Exhibition, bagging the Gold Award for “Best Print Advertisement 2014” in the QS Creative Awards and for the acceptance of our paper on “The Internationalization of German Engineering Programmes” under the track “ Internationalising the Curriculum: Educating Global Citizens”.

The 10th QS-APPLE Conference was held in Taipei, Taiwan from 11 to 13 November 2014 at the Taipei International Convention Centre. With the growing importance of the QS studies, this year’s event saw all the exhibition booths taken up as it prepared the stage for the largest event in the history of QS Asia.

TUM Asia’s award at the QS Creative Award was a validation of the twelve years of investment that Technische Universitaet Muenchen (TUM) has poured into Asia. Starting out with only one Master programme in 2002, TUM Asia is now a fully grown daughter campus of TUM, with six Master programmes – four of which are jointly awarded with National University of Singapore (NUS) and Nanyang Technological University (NTU) and two Bachelor degrees in partnership with Singapore Institute of Technology (SIT).

The Gold Award for “Best Print Advertisement” came as a surprise as TUM Asia was up against many worthy competitors, such as NTU, The Hong Kong University of Science and Technology (HKUST), Nottingham Trent University, Taipei Medical University and more. This award validates the presence of TUM in Asia and Singapore, marking the achievement of our initial vision to transfer the technological expertise in Germany to Asia and vice versa.

The award was for the Print Advertisement in TUM Asia’s TUMorrow campaign, a campaign that served to highlight the successes of TUM Asia’s graduates in becoming contributing members of the industry and society. Innovation has always been a key pillar at TUM and the ability to transfer that to TUM Asia helped to create TUM graduates that would become engineers and scientists who would go on to shape the future.

This is the first of many accolades that TUM Asia is poised to achieve with the quality of teaching and the opportunity of partnership with top universities and companies in this region. This news come as a tribute to the twelve years of TUM’s investment in Asia and the recognition by QS Asia signifies the growth of TUM as a significant education provider here in Asia. 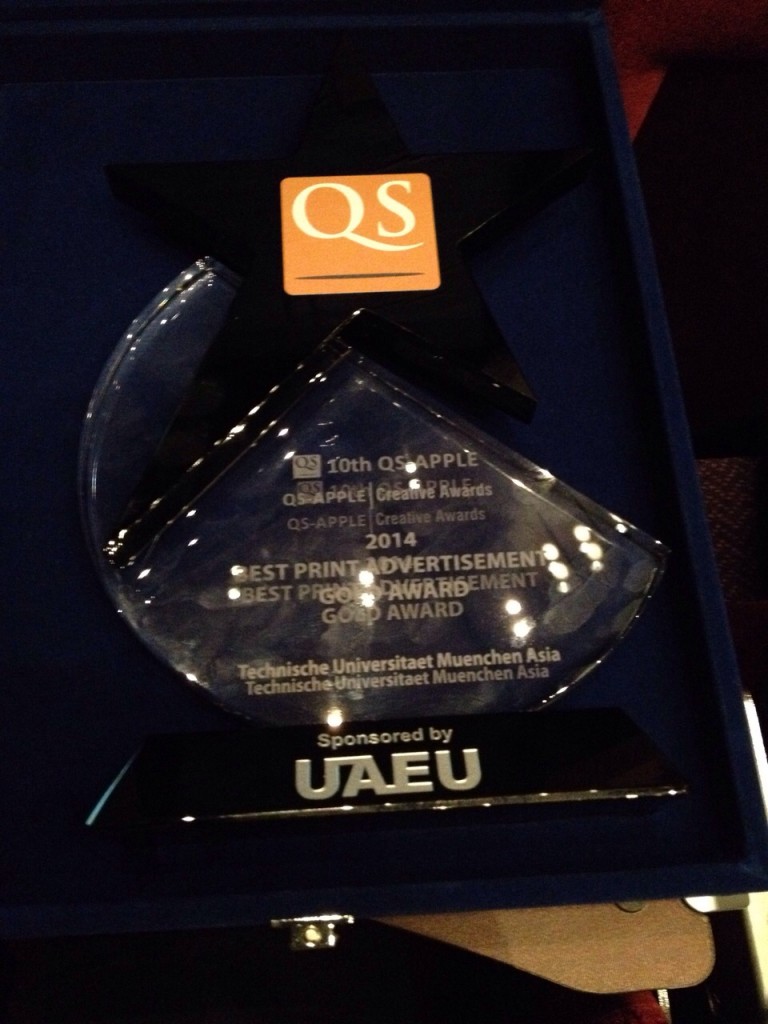 Photo of the award received at the 10th QS-APPLE Conference