As the world continues to shrink with globalisation taking centre stage in all spheres of our lives, enabling seamless inter-urban accessibility in record travel times becomes not just a dream but a necessity for us. High-speed rails have the unparalleled potential to bring new regions together, connecting villages and towns to cities while making it accessible yet affordable for people.

The pursuit for high-speed travel and greater riding comfort has thus sparked innovations in the field of railway infrastructure and one of it is the use of ballastless track systems. Apart from lacking in ballast, how is it different or unique from its counterpart? Here’re some key take-aways of this unique track system.

The lack of elasticity of these layers is compensated by the conscious use of elastic components, thus achieving the necessary deflection of the track and equal load distribution on multiple support points. (Source: Trackopedia) Ballastless tracks are predominantly more popular for high-speed systems where the need for geometrical compliance is more acute. Ballasted system on the other hand, may tend to get misaligned through settlement, poor drainage or even normal passage of traffic, thus requiring higher level of maintenance.  (Source: New Civil Engineer)

The development of slab tracks for full service railways was initiated in Europe in the middle of the 1960s by the planning of long tunnels where the track had to be laid directly on a rigid rock or concrete base. In Japan, the same problem arose by the construction of the new Sanyo-Shinkansen lines, opened in 1973/74, where more than 80 per cent of the tracks had to be supported by rigid concrete structures, tunnels and viaducts. (Source: Global Railway Review)

The actual breakthrough in Germany for ballastless track technology for high-speed routes took place on the new line between Cologne and the Frankfurt/Rhine-Main complex, which was the first German one to be built exclusively for high-speed trains with a maximum speed of 300km/hr. For the first time, Deutsche Bahn AG applied this new technology on a full section of track: with extremely high levels of technical quality, and with great overall success. 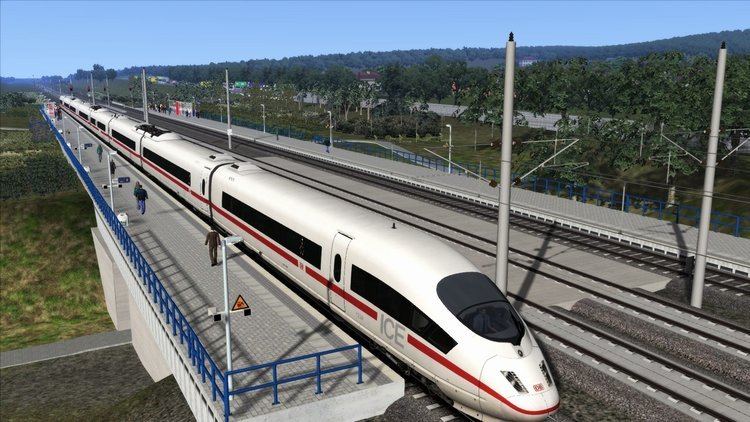 One notable ballastless track that is currently in operation is the Nueremberg-Ingolstadt new high speed line opened for service in 2006. After Germany was reunified in 1990, connecting the capital Berlin with northern and western Germany, particularly the heavily populated and economically important Nordrhein-Westfalen region, became a priority. At that time, it took more than six hours to travel from Berlin and Munich. With the completed line, the journey time is reduced to 4.5 hours from Berlin and Munich. 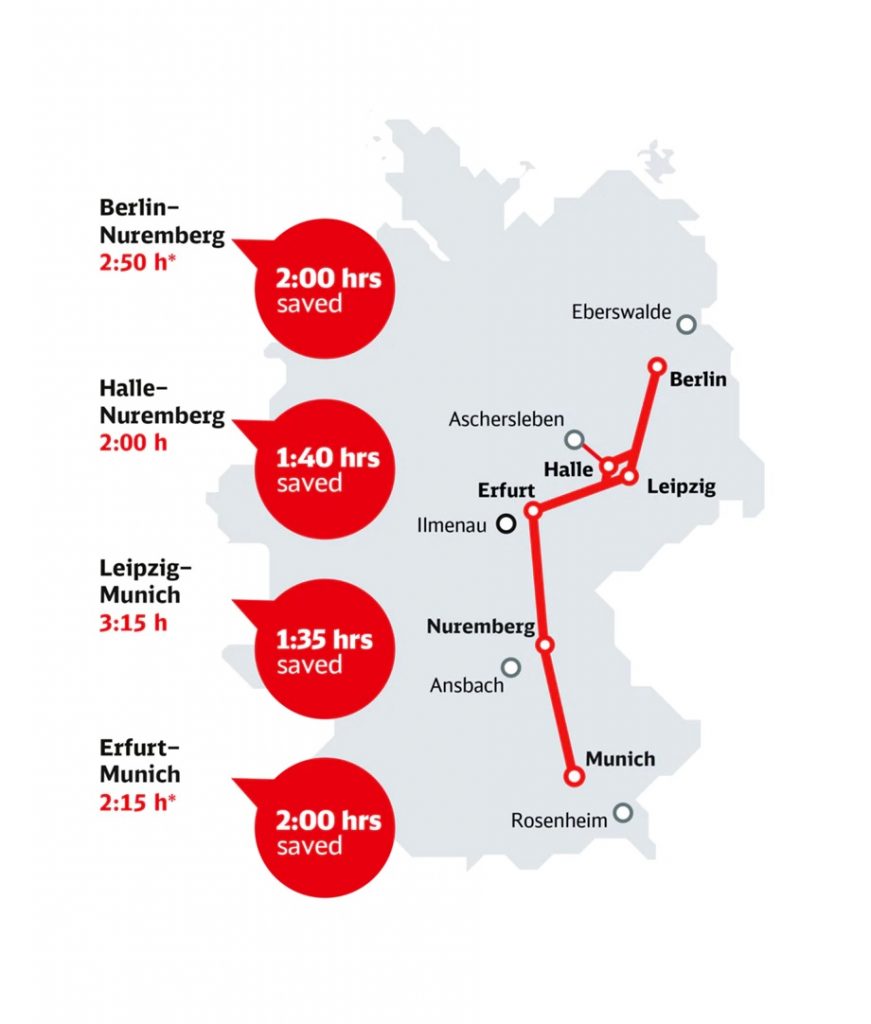 A major element of the project was a €3.6bn, 89km high-speed line (NBS) – 78km being entirely new – from Nuremberg to Ingolstadt designed for 300km/h (186mph) operation. Much of the NBS runs alongside the A9 motorway to minimise environmental disruption. The route requires nine tunnels totalling 27km, three constructed by the cut-and-cover method while the remaining six are bored in the traditional manner. (Source: Railway Technology)

In August 2002 the new high-speed line Koln-Rhein/Main was put into service. Using ballastless track technology in a total length of about 150 km, the requirements of small radii down to r = 3350m, maximum cant of 170 mm, maximum longitudinal inclination of 40 o/oo and usage of eddy current brakes have been met. . (Source: Transportation Research Board)

While ballasted track is commonly composed of steel rail, railroad tie, railway fasteners and ballast bed, ballastless tracks whose bed is composed of concrete and bituminous mixture and is formed by concrete casting. Instead of ballast bed, steel rail and railway sleeper is laid on the concrete track.  As such, ballastless track systems has many advantages over ballast tracks such as:

5 Benefits of a German-Singapore Degree 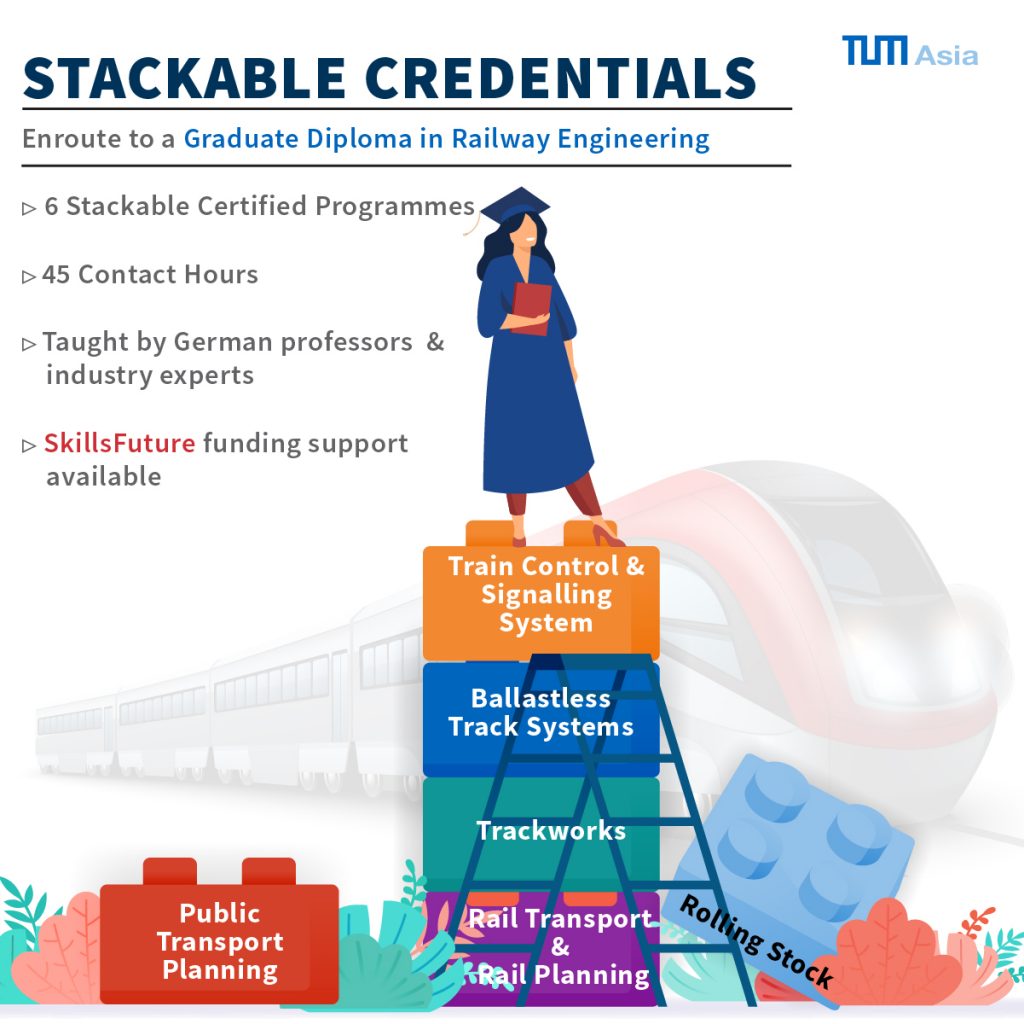 The use of ballastless track systems is set to be one of the key engineering technologies in transforming mobility of the future.

In this course, you will learn the requirements and procedures for ballastless track system design for high-speed and conventional mainline rail infrastructure, special features of Metro and light-rail systems, train track interactions, and the track lay-out and alignment for urban rail systems. The module will also cover track cross section design including trackside equipment, the sources, propagation and effects of noise and vibrations, measures to control and to counteract noise and vibration. You will also get to learn about the design of special floating slab tracks, the environmental impacts, the design of green tracks, the design and construction of tram-tracks, the embedded track systems – metro and light rail, noise and vibration, floating slab track, embedded track, tram tracks, open tracks.